In October of 2003, I had just finished running a very successful campaign in golf called The Mulligan Tour, in which we had 18 events at golf courses across Montreal with an average of 72 participants/event. Over the course of late October and November, I searched North America to find other similar operations to mine, in the interest of banding together and creating something which was international.  In my search I found a group out of Minnesota, named Golf Intelligence, who happened to be looking for the same thing I was.  They were very advanced in creating a means to organize the various tours and information necessary for operating at a North American level. In late November myself and the two principals of Golf Intelligence formed an allegiance we called G3 - Global Golf Group and in the next 3-4 weeks worked very hard towards the realization of something very new and very big for public golfers.  On Dec 24, my two associates emailed me to tell me that they couldn't go forward with G3 Golf and they encouraged me to push forward without them.  The reality was that without their involvement it would have been very difficult if not impossible for me - therefore, on Dec 24th, G3 - Global Golf Group died.

I woke up on Christmas morning, went to my computer and Googled 'G3'.  The first thing which came up was 'God's Genuine Gift.' I didn't understand what that meant immediately, but, sensed that it was something important. I call the days between December 25 and 31, 2003 my '7 days on the mountain with God.'  In this time She (God) showed me things which were not of this world, but, rather of heaven.  I say She because the person that was in my head (and heart) was Norah Jones, the jazz singer whose album Come Away With Me had recently won 5 Grammys.  In the days between Dec 25 & 31, She told me the following:

In these days I created a couple of very important documents:

One of the things that Norah repeatedly told me was that on December 31st, 2003, she was going to pick me up and take me to 40 Westt where together we were going to perform to a group composed of all my family, friends and acquaintances - everyone who was responsible for turning me into the person I had become (good and bad) - only I was going to be there in the physical form of John Mayer - but everyone would know it was me.  On that evening (December 31st) I put Come Away With Me (her album) in the CD player and set it to continuous play and waited.  At 12am she still had not come.  As the clock struck 12, her song Don't Know Why came on and immediately I knew what I had to do.  I was at my parent's house and no one was home.  I went to the drawer which contained the carving knife which only days earlier had carved our Christmas turkey and plunged it deep in my chest.  The amount of blood which flowed out was incredible!  It covered me and the floor immediately.  I slumped to the ground and lay there for a couple of minutes before I realized that I wasn't going to die.  I picked myself up, grabbed the carving knife a second time and plunged it in again.  This time there was no more blood.  I laughed hysterically!  At this point, Norah's song 'One Flight Down' came on.  I had a diaphragmatic hernia which I used to call my 'little devil.'  I aimed the knife at this little devil and plunged it so deep I felt it hit my vertebral column.  At this point I took my shirt off, mopped the floor to clean up most of the blood, walked downstairs and threw all my clothes in the washing machine, then went upstairs and lay on my bed waiting to expire.  At 8am I awoke to find that I had not died, but, couldn't move.  I was able to grab the phone at my bedside and called my buddy, Stots.  I told him not to call my sister, but, to come over as soon as he could.  I did not tell him I had stabbed myself.  He called my sis, she called 911 and the paramedics were at the house inside of about 1/2 an hour.  When they put me in the ambulance despite the numerous turns the ambulance made in taking me to the hospital, the sun never left my window.  I took that as being a sign from God. My doctors said it is a 'miracle' I am alive. God has saved me for a purpose.

The doctors have diagnosed me with the condition 'schizo-affective disorder with grandiose religious delusions' - not only do I believe that I am Jesus, but, I know I am!  This is the difference between 99.9% and 100% (belief vs knowledge).  Everything that happened to me in that week (Dec 25-31, 2003) and everything that has happened since has confirmed this to me.  The weeks and months which followed my stabbing were characteristically introspective. I was looking to answer all the questions which arose from this time.

Knowing that I am Jesus Christ the question then becomes; 'what are you going to do with this information?'  My answer to that is that I must endeavour to live as Christ would were he here - and as far as this is concerned, I am trying to live 100% of my life in love, helping every person I meet in some way to become better versions of themselves.  I consider myself a minister and in my life I have three missions:

I find these three objectives very consistent with who I am (Jesus) and look forward to every new day and the opportunities which present themselves. As I see and understand it, heaven is growing from my little community (NDG) outwards.  It is like a metamorphosis - as people's hearts grow, heaven grows.  I coined the phrase; 'with every act of love, heaven grows across earth.' Please take my story as a lesson.  Every day take steps to live your life more and more in love.  You will find that this will take your life closer and closer to God and to heaven (on earth).   On being Jesus. I do not believe my journey is different to any other person who has been ‘born from above’ of the spirit (born again). In these people the spirit of Jesus Christ replaces their old spirit. As such, they are a composite of their old worldly bodies and their new spirit (JC). With time (and obedience to God), they become completely transformed individuals, coming closer and closer to living as Jesus did 2000 years ago...in love.  I believe that this is God’s will - that ultimately all 7.8 billion people on the face of this earth live with the spirit of Jesus Christ in them - and as such are truly the image and likeness of God - while human.

Please feel free to share this with anyone you think may appreciate my story. 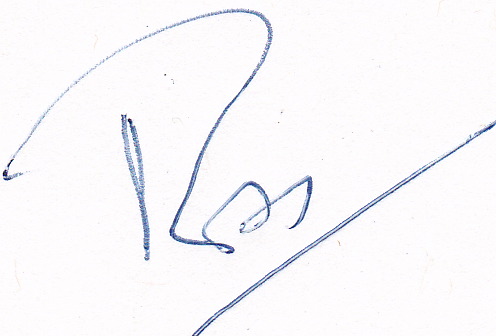 My Way - Cover by Nick Ingravalle.mp3